Our tour of the Sacred Valley consisted of two different bus tours, a half day Cusco bus tour and a full day tour of the Sacred Valley. The Cusco bus tour stopped at one site inside Cusco and several of the major Inca ruins just outside the city. After picking up all the passengers at their hotels, the bus took us to the Koricancha complex. Koricancha originally was a Pre-Inca temple that the Incas built the Temple of the Sun on top of the foundation. Then the Spanish constructed the Church of Santo Domingo, incorporating much of the structure of the Temple of the Sun.

Koricancha provides some of the most visible contrasts between the architecture and construction techniques of three different civilizations. From Koricancha, we left the city and visited some of the ruins in the vicinity of Cusco. We stopped at Sacsayhuaman, the fortress guarding the entrance to Cusco from the Sacred Valley; Qenko, an Inca temple built into a limestone outcropping; Puca Pucara, the "red fort" guarding the approach to Sacsayhuaman; and Tambo Machay, a sacred bath site. The sites provided proof of the advanced Inca engineering and planning capabilities. Although the tour only lasted half a day, we managed to cover a lot of ground. 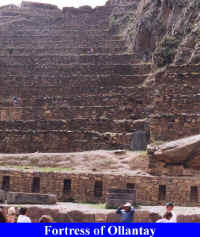 The first stop for our full day bus tour of Sacred Valley was the marketplace of Pisac. All sorts of local artisans were selling their goods and depending on your bartering skills, there were some very good deals. Unfortunately, we did not stop long enough to visit the Citadel overlooking the town. After shopping the morning away, we were taken to a restaurant between Pisac and Urabamba with a buffet of many of the local specialties.

Although the establishment was obviously catering to the tourist from all the bus tours, the food was good and the lines moved quickly. From lunch, we moved on to the fortress at Ollantay in the town of Ollantaytambo. The fortress is another impressive Inca structure guarding the strategic entrance to the lower Urubamba Valley and offers fantastic views of the valley and surrounding mountains. 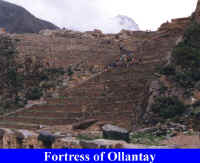 Our last stop on the bus tour was Chinchero. The main attraction was an old Spanish Church at the top of the town. There was also plenty of artisans selling their goods in the church plaza in case you did not find what you were looking for in Pisac. The stop in Chinchero was probably chosen more to break up the long ride back to Cusco than for any other reason. The Sacred Valley bus tour was an effective way to see the various towns spread out around the valley. 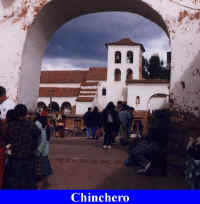 For almost all the stops on both of the bus tours, we needed to have our Cusco Tourist Ticket to enter the sites. And even though they were bus tours, we had to do some serious walking and climbing to get around some of the ruins. So sign up to take these tours after you have been in Cusco for at least a day so you will be used to the altitude.

Between the two tours, we hit most of the high points in Sacred Valley. The only thing we could have changed if we had the time was to either hike to all of the areas around Cusco or to bike to some of the towns in the Sacred Valley.