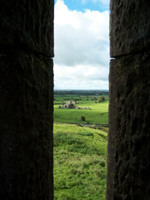 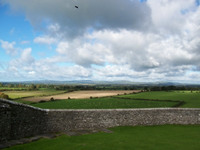 After our singing at breakfast in Kilkenny, we pointed our van towards a tiny town called Glin on the south bank of the Shannon River. We picked our destination because one of the Irish pubs in our hometown is run by a family from Glin. On our way, just before lunch, we reached the Rock of Cashel, another Irish Heritage Site with a commanding view of the surrounding countryside. After wandering around the uncovered Cathedral and the cemetery that was within the walled confines of the fortress, we could not blame the former occupants for abandoning the frigid site centuries ago for warmer locales with less exposure to the unrelenting winds. We passed on hiking out to the Hore Abbey ruins that were just down the hillside and instead opted for soup and sandwiches inside one of the nice warm pubs in the town of Cashel. 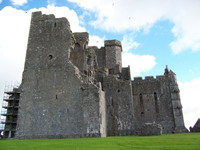 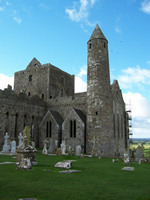 After lunch we continued to head west towards Glin. We stopped along the south bank of the Shannon River for a break and some pictures before jumping back into the van to avoid a rain storm. We had already arranged to stay at B & B called O´Driscoll´s which was run by another family member of the pub owners from our hometown. Even though it was occasionally raining hard outside, we managed to force ourselves to get some exercise. The effort proved worthwhile, a three mile run revealed an old abandoned house castle, the musty smells of the damp countryside, and the acrid odor of peat burning to keep the houses warm. After the work out, we headed to an Inn down the road for dinner and then dodged the raindrops between the several pubs located just up the street from our B & B. 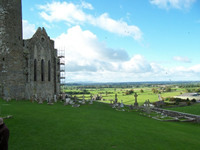 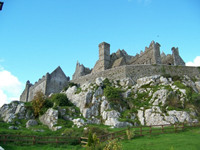 In the morning, after our usual breakfast routine, we headed for the town of Tarbert to take the ferry across the Shannon River. Although we were wedged in next to a truck loaded with cattle, we managed to make the river crossing with no incidents. After getting off the ferry, we proceeded north towards Galway. We were in the area called The Burren, near the famed Cliffs of Moher, but we did not stop there because the weather was not great, more rain, and we knew we would be back in the area in a few days. Plus, the drive was fairly slow on the narrow back roads and we did not want to be late for our Bed and Breakfast reservations in Galway. We stopped in a pub in Lisdoonvarna for a quick bite to eat and then pressed on to the North. 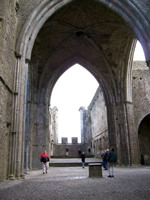 Galway turned out to be a major navigation nemesis! We ended up driving around for about an hour trying to find our B & B. Part of the problem was probably our lack of good maps for the downtown area-the full country maps did not have enough detail. After we checked in, the owners of the Bed and Breakfast were able to quickly direct us back downtown for dinner, but even then we managed to get lost again on the way back home at the end of the night! Downtown Galway had a lively pedestrian only area that contained all sorts of shops, pubs and restaurants. Unfortunately, we spent so much time driving around lost that we were only able to have dinner and visit some of the Pubs. However, this was the first time we ran into crowded bars and lots of people out and about. This should not have been surprising considering this was the biggest town we visited and it was a Friday night!