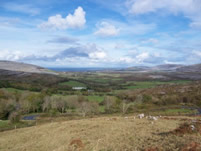 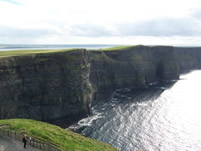 The next morning, we packed our bags and headed out of Westport towards the town of Ennis. We were planning on staying in Ennis for the next two days. But first we wanted to tackle a trip to the Cliffs of Moher. We were able to drive quickly from Westport to the vicinity of Galway and then our progress slowed markedly when we exited the highway on the coastal road towards the Cliffs. We did not complain about the speed because the winding road provided us breathtaking views along the coast and through the Burrens. There wasn't too many places to stop for lunch along the way, but we manage to find a small coffee shop in Ballyvaughn for a quick sandwich. Once at the Cliffs of Moher, we wandered around for about an hour and spent the one Euro to go to the top of the tower on the Cliffs. The view was not much different up there, but hopefully our Euro donation will help preserve the Cliffs. 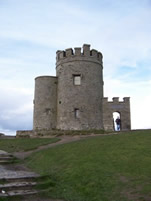 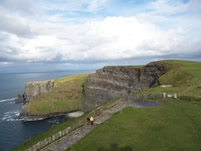 We also were not adventurous enough to tackle some of the hikes that you can take along the Cliffs, so instead of walking, we just drove to the neighboring town of Doolin which is known for its annual music festival. After a little shopping, we where we were able to supplement our light lunches with some food and beer at one of the local pubs.

Buy the time we made it to Ennis from Doolin, we did not have any time for anything except checking into our B & B and taking the short walk into town for dinner and some more traditional Irish music. The next morning we headed back into town to explore some of the tourist attractions. It was nice to finally escape the drudgery of packing our bags and traveling to the next town in the morning. Out in Ennis, we visited the Clare Museum whose well designed history of the people of County Clare provided some wonderful insight to the Irish culture. We then toured the Ennis Friary which was another Irish Heritage Site that contained some impressive sculptures. After these trips to the past, we headed to the pubs for a current perspective on the local food and entertainment. 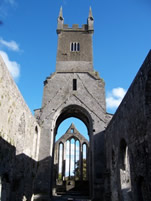 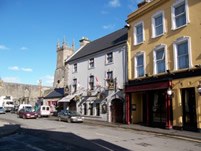 One of our first stops was Cruise's Pub, an Ennis favorite, which offers traditional Irish music seven days a week. As with all the the towns we visited, there were plenty of pubs to visit before we headed back for the night.

The next morning, we had to resume our ritual of packing up and leaving our B & B. Our destination for the day was Bunratty, just outside of our departure airport in Shannon. On the way to Bunratty, we stopped outside the Quin Abbey but it did not look like we could enter the structure. Then we visited the Knappague Castle which is home to a nightly medieval themed banquet. Unfortunately, it was too early for dinner and again we could not get inside to look around. We did wander around the impressive gardens outside the castle. Our next stop, the Craggaunowen Project, was a little more successful. We were able to tour the Craggaunowen Castle, a typical example of a fortified Towerhouse built in 1550, and then we walked around the 50 acres of wooded grounds that contained reproductions of several prehistoric and early Christian sites. 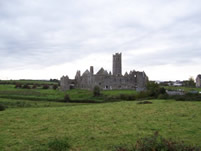 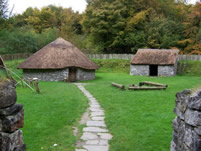 Along with exhibits depicting a lake dwelling called Crannog and a ringfort from the 4th or 5th century, the project also displays a reproduction of the Brendan Boat which allegedly transported St. Brendan to discover America centuries before Columbus made the trip. After trekking around Craggaunowen Project, we were ready for a well earned lunch at roadside pub that was a few miles from the project.

After lunch, we made our way to our final destination of the trip. We had reservations a hotel that was next to the Bunratty Castle and Folk Park. After checking in, we motivated ourselves to go to the castle despise the fact that the rain had increased to a steady downpour. The Bunratty Castle is the last of four castles that have been built on the site. 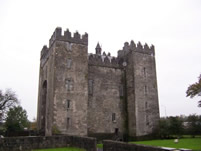 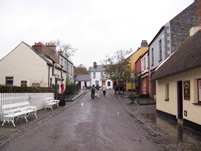 It was built around 1425 and is now the most complete and authentically restored and furnished castle in Ireland. The Folk Park next to the castle is a recreation of the rural life in Ireland about 100 years ago and contains reconstructed farmhouses, cottages and shops. After the torrential rain ran us out of the park, we resorted to the indoor activities of shopping in the Blarney Woolen Mills store next door for our final gifts. After spending almost all of our cash, we had dinner at one of the several restaurants within walking distance to the Castle. To cap off our evening, we stopped into Durty Nellys, one of the more famous pubs in the area, for our last rounds in Ireland.

The next morning, we packed up for the final time and made our way to the Shannon Airport to fly home.

Overall, it was a wonderful trip. If we had to do it all over again, we would only like to change a few things: