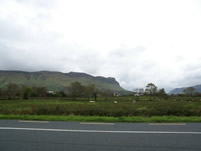 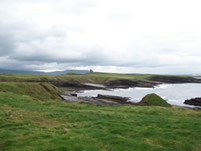 We actually had no problems driving out of Galway! Our next destination was Donegal, on the Northwest coast. We stayed on the main highway until we got to Sligo and then we got a little more adventurous and diverted down a small road along the coastline by the town of Mullagmore. We ended up on a short four mile loop that eventually made it back to the main road. But along the way we viewed some fantastic coastline, a private castle overlooking the ocean, and a fishing fleet grounded by the tide.

Since a majority of the drive was on main highways, except for our short diversion to Mullagmore, we were able to make it to Donegal by lunch time. We grabbed something quick to eat in town and then headed to our B & B to check in. Afterwards, we roamed around Donegal to see what sort of attractions were in the area. Our first stop was in the Donegal Castle, another Irish Heritage Site. 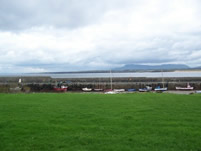 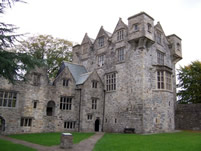 It was much smaller than Kilkenny Castle or the Rock of Cashel, but it still provided some interesting information on what castle life was like in Ireland a few centuries ago. After touring the castle, we browsed the shops in town and then we wandered through the ruins of an abbey that was on the edge of town overlooking Donegal Bay as we made our way back to the B & B. There were also boat tours of the bay available next to the abbey, but we had already missed the last departure. In the evening, we headed back out into town for dinner and then asked around for a pub that was playing traditional Irish music. Since it was Saturday night, most of the pubs had bands playing, but we had to search for awhile to find the one place in town with traditional music. Our efforts were rewarded and we spent the rest of the night in a small pub with a couple of guys singing and playing guitar and and an occasional guest singer from the audience. 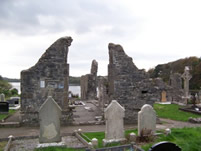 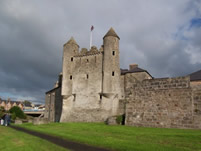 The next day, we headed south, but not before making a detour east into Northern Ireland. We expected a formal border crossing but there was just a sign as we crossed into the country. As with all the areas we visited in Ireland, the scenery was beautiful as we drove around the Lower Lough Erne. We stopped in the town of Enniskillen and walked around the grounds of the Enniskillen Castle and through a small part of the town, but we did not even attempt to buy lunch or a beer at a pub because no one had any British Pounds to spend. Since Northern Ireland is part of the United Kingdom, they were still using the Pound instead of the Euro like the rest of Ireland. After we left Enniskillen, we headed west towards Sligo along the Lower Lough Macnean and once we made it back into Ireland, we got back on the highway towards our next destination, Westport. 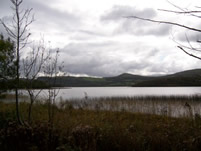 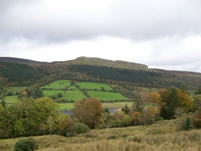 Westport was the only unplanned overnight for the entire trip. We did not have bed & breakfast reservations because we wanted to have some flexibility in case we discovered a must-see place . We had no problem getting rooms once we got into town although that may have been due to the fact that our trip was in October and not during the height of tourist season. The excursion to Northern Ireland took up most of the day, so by the time we got to Westport and secured our rooms, we only had time to grab some dinner and search out more traditional Irish music for our evening's entertainment. Our first stop and one of the main reasons we chose to stay in Westport was Matt Molloy's Pub. 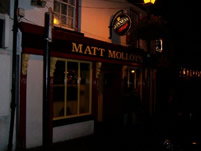 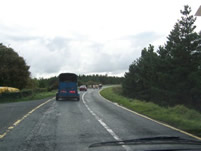 Matt Molloy is a flute player for the Chieftans, the Irelandâs premier traditional band and his pub is a favorite in Westport. We ended up only staying for one beer, it was a little too crowded for our taste. We opted for a place next door with an entertaining old fashion Irish band and a little more elbow room. We ended up closing the pub listening to the music! Although this sounds like a long night, it is not as late as it may seem since most drinking establishments in the Irish countryside close way before midnight on the weekdays.